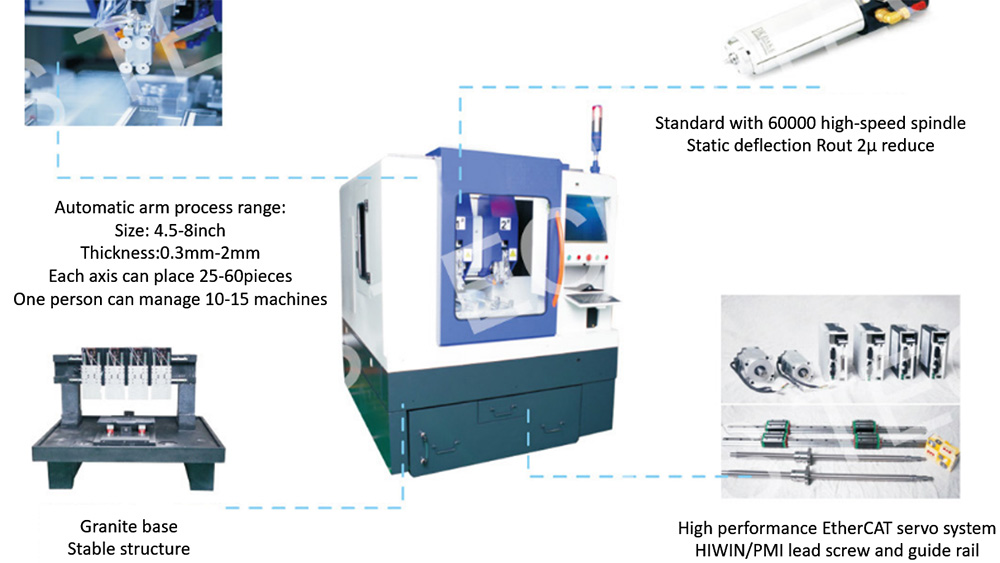 Servo choice is up to the new IKE series servo 200V products , the use of EtherCAT bus communication . The main specificity of the IK3 series servo is its strong overload capacity, and it has a good adaptability to long-term small-scale overload and short-term transient impact load. 2 00 V -stage servo controlling circuit of the AC 220 V , the main circuit A C 22 is 0V . When the servo matches the motor for the first time, it is necessary to learn and record the encoder position angle. Servo Selection parameter table as in FIG. 2 servo Selection of parameters shown in FIG.

Item configuration as in FIG. 3 shown in FIG. 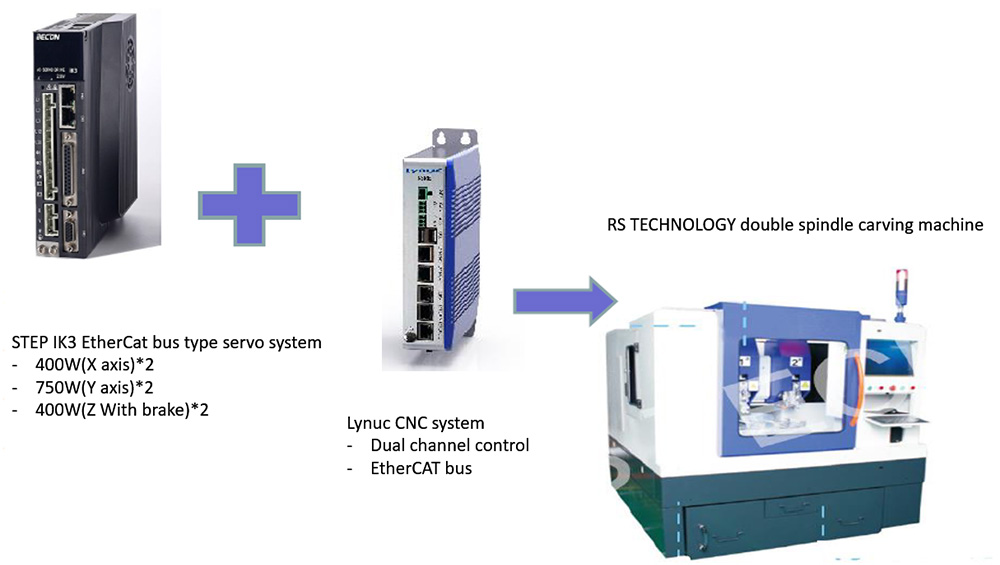 FIG control system of the system to provide Leynhac, the EtherCAT bus communication, dual channel (two independent processing systems Cartesian coordinate system) control, FIG. 3 about the vertical black box correspond X1 axis and the X2 axis, It can feed in the horizontal direction; the white aluminum sheet on the bottom corresponds to the Y1 and Y2 axes. The aluminum sheet can drive the fixture mounted on it to move in the Y- axis direction. At the same time, the tool holder is installed on the white aluminum case at the lower end of the black box. Move up and down in a vertical direction. 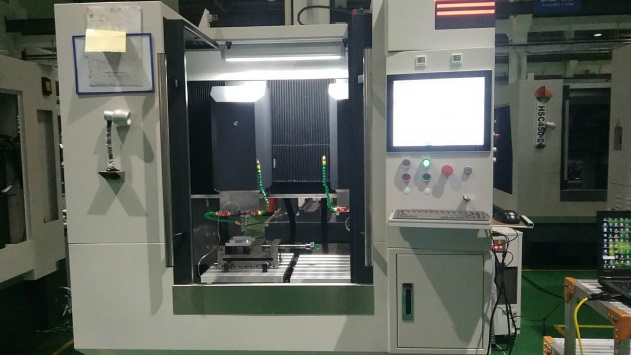 The green tube next to the tool will spray alcohol during processing to cool the processing surface. The aluminum sheet shown in Fig. 5 is a fixture and a processing workpiece, and a square-notch-shaped workpiece is used in the initial stage of testing and debugging. 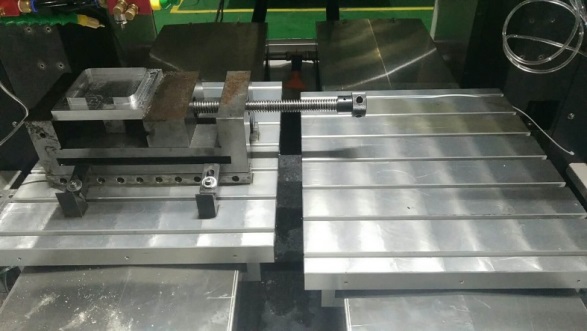 Servo drives and servo motors are provided by Zhishan. There are a total of 8 servos on one device , and each processing channel corresponds to 4 feed axes, as follows

A variety of tools for testing servo performance are integrated in the LINAK system, including "roundness test", "position step test", "position sine tracking test", etc. The following describes each test and the actual process debugging process:

The “roundness test” function in Lenac system can measure the trajectory tracking performance under two-axis linkage and the synchronization performance between the two-axis servos; as shown in the figure below, the given trajectory is an XY plane ( YZ plane, ZX plane ) Circle, the radius can be defined by the user. The red trace in the figure is the theoretical curve and the actual running curve corresponding to the blue trace. 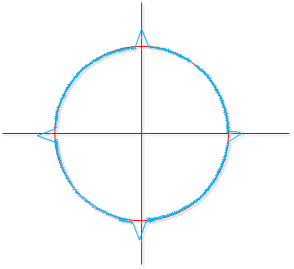 After running, the maximum error value of the theoretical trajectory and the actual trajectory can be displayed. In the roundness test, the following problems can be tested:

Possible cause: The position loop kp is too small, and the tracking performance of the servo is poor, so the theoretical trajectory and actual deviation are large;

The actual running trajectory is non-circular, showing a "瘪" shape, and it is obvious when the magnification is small.

Possible reason: This processing technology requires multi-axis linkage, and the parameters of the position loop have a great impact on the shape of the trajectory. The reason for this obvious "out-of-round" phenomenon may be that the position loop parameters between the linked axes are not Equal, resulting in some axes feeding more and some axes feeding less under the same conditions;

Solution: the position of the ring as far as possible consistent parameters of the two axes (position loop kp and feedforward kpre), feedforward parameter greater impact on the number of track shape.

C. The actual running trajectory is "non-circular". When the magnification is large, it will appear randomly (under the same conditions, sometimes it is circular, sometimes non-circular, and when it is non-circular, it sometimes appears that the X axis is advanced or not). ( Y- axis is ahead)

Probable cause: This problem was found during the test. There may be several position loops out of sync between subsequent positioning to multiple servos, resulting in small deviations in the actual running trajectory and random situations. This kind of asynchronous phenomenon may be irrelevant in some occasions, such as robots, which may be more important for general machine tool occasions such as Fuqiang.

Solution: Now IK3 has modified the software for Fuqiang special programs ( 1041425 and 1041426 ), which completely solves this problem.

D. As shown in the right figure below, there is a large difference between the left and right of the trajectory.

Possible cause: The following figure on the right is the waveform when ZX is linked. Because the Z axis will feed vertically during the processing, the load during the ascent and descending phases of the Z axis is different (overcoming gravity) . Therefore, it is difficult to apply the same rigidity to both the rising phase and the falling phase;

The LINAK system can perform a "position step" test for a certain axis, and instantly give a position step command to test the following performance of the servo; 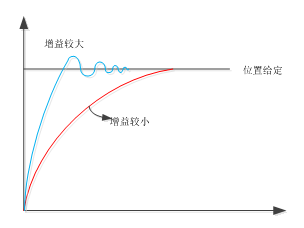 The Lenak system can draw the given position curve and the actual running trajectory curve of the motor. The black straight line in the figure is the given step position command. When the servo parameter gain is small ( kp of the position loop and speed loop ), then The actual running curve is the red curve in the figure. Its characteristics are: slower follow, longer stabilization time, larger following error during running, but almost no overshoot exists; if the gain adjustment is high, the actual running curve As shown by the middle blue line, its characteristics are: fast follow, small follow-up error during operation, but there is overshoot phenomenon, it takes a period of up and down oscillation after reaching the position to stabilize;

For the blue curve in Figure 7 , the stabilization time in the figure can be adjusted by adjusting the integration time of the speed loop. Generally speaking, the smaller the integration time, the faster the system response and the faster the convergence, but the more the amount of overshoot accompanying it. large, the performance of the highest point in the apparatus apparent shock, as in FIG. 8 below: 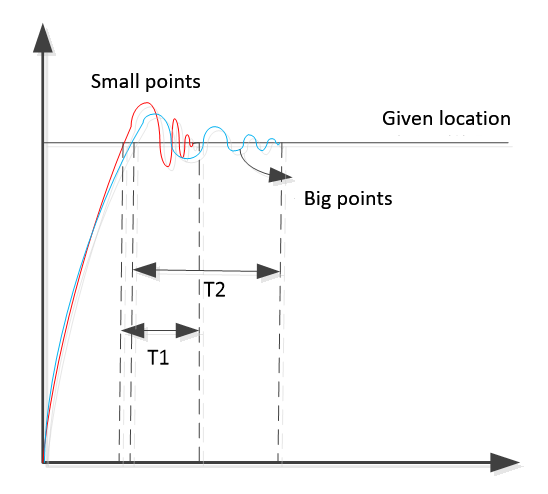 Leynhac system may be a sinusoidal axis position command, the servo axis performance test followed, as in FIG. 9 below: red sine curve delivered by the controller as the position command, the blue line represents the actual trajectory, from FIG. 9 may be in It can be seen that there is a lag between the actual trajectory and the given position. Therefore, there will be a following error value of the green line mark ( for easy and brief identification in Figure 9 ). Big. 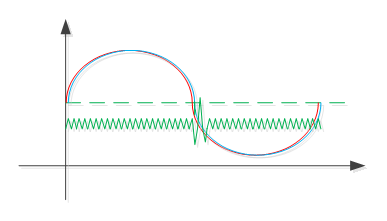 Note: The above-mentioned tracking performance is good, and the actual processing process is not necessarily good. Therefore, the above test can be used as a reference, but the final debugging needs to be based on the actual machining workpiece.

● The actual processing and debugging process 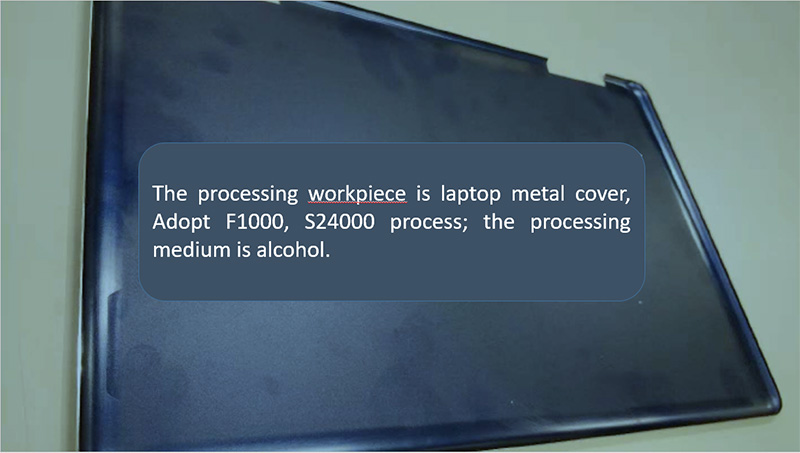 Requires high servo-following performance during processing. The kp of the position loop and speed loop are adjusted very high, as shown in Table 2 :

For such high demands on the tracking occasion, the position and velocity loops need to adjust the rigidity is relatively large, so as to ensure good tracking, but due to the current loop bandwidth is relatively low, if the increase in the velocity loop and position loop kp after Will cause current oscillation and abnormal noise of the motor. In this case, reasonable setting of speed feedback and low-pass filtering can reduce vibration;

The sharp angle at the commutation is large, and this problem can be effectively reduced after adding the auto-disturbance reduction algorithm and friction compensation;

After the commissioning, the effect of the enlarged machining surface is shown in the figure, which meets the customer's requirements and the project is accepted.